Project SnowChild, my new computer project based on the Antec Cube, EKWB Edition: 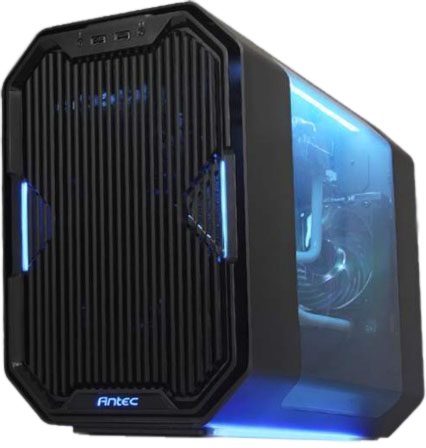 My last PC was based on the UV-green color. It included a custom water-cooling loop with UV-green coolant and a few UV-green sleeved cables. For my new build I wanted to do something a bit different.

My first priority was that my new PC should be small. My old case was huge with a volume of 87L so even though it was easy to change or upgrade parts in it, it was simply taking too much space. After comparing many cases only 2 were left, the InWin 303 Type-C (which was by then only announced and not yet released) and the Antec Cube. After a lot of reflection about benefits and disadvantages I decided to go with the Antec Cube, which has a volume of 42L.

The Second key aspect of my build was that the PC should make use of ASUS’s Aura RGB lights. In order to make the light effects stronger I wanted the whole PC to be mostly white. This was one of the biggest factor about choosing the case as the Antec Cube would only come in black while InWin’s 303 had a white color option. After watching a few tutorials about painting PC parts and cases I decided to take the challenge and ordered white primer, paint and clear finish from MTN.

The last but not least point was my desire to use hard tubes for the water-cooling loop. After having seen a lot of modding pictures online from different loops with soft and hard tubes it was obvious to me that hard ones look way better. Thankfully there were already 1-2 builds of the Antec Cube with hard tubes so I knew that the case had enough space for it.

The first step was to take the case apart before  being able to paint it. 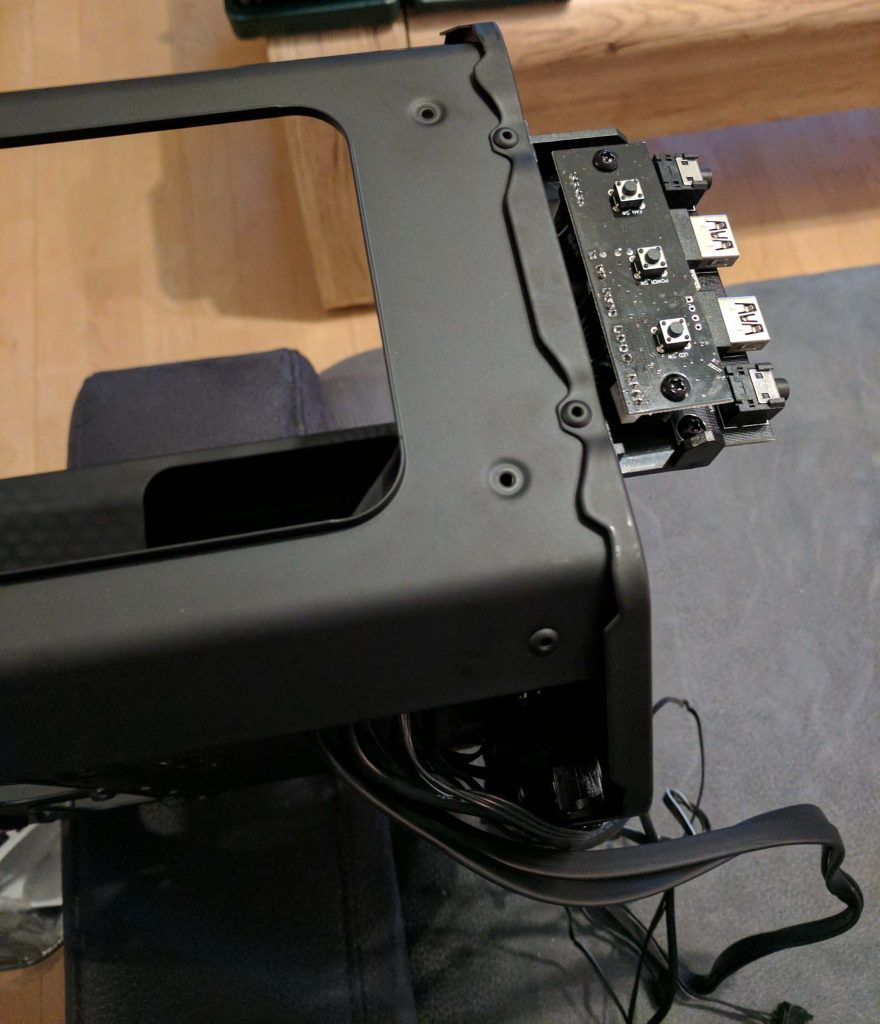 Thankfully the Antec Cube is really really easy to take apart, everything is simply hold by screws which makes it very easy to take off the windows and different parts of the case. Once every screw is undone only about 20 rivets hold the case together. While it would have been possible to paint the case like this, I decided to remove the rivets and take the case apart completely to paint every single surface. 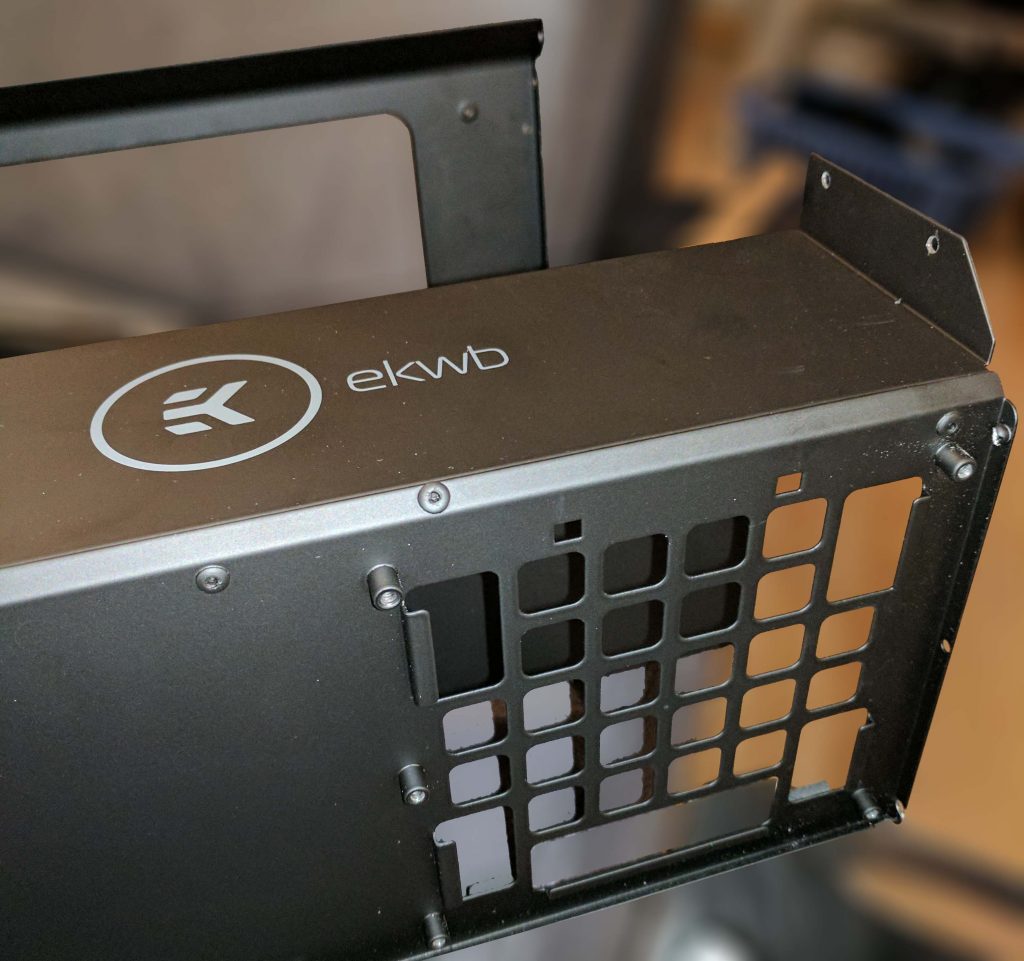 Too bad this EKWB logo was going to disappear once the case is painted white. Once all the rivets were taken off, the case consisted of about 10 parts.

Once taken apart I decided to try out my painting skills on a few small parts to see how the paint was going to turn out. 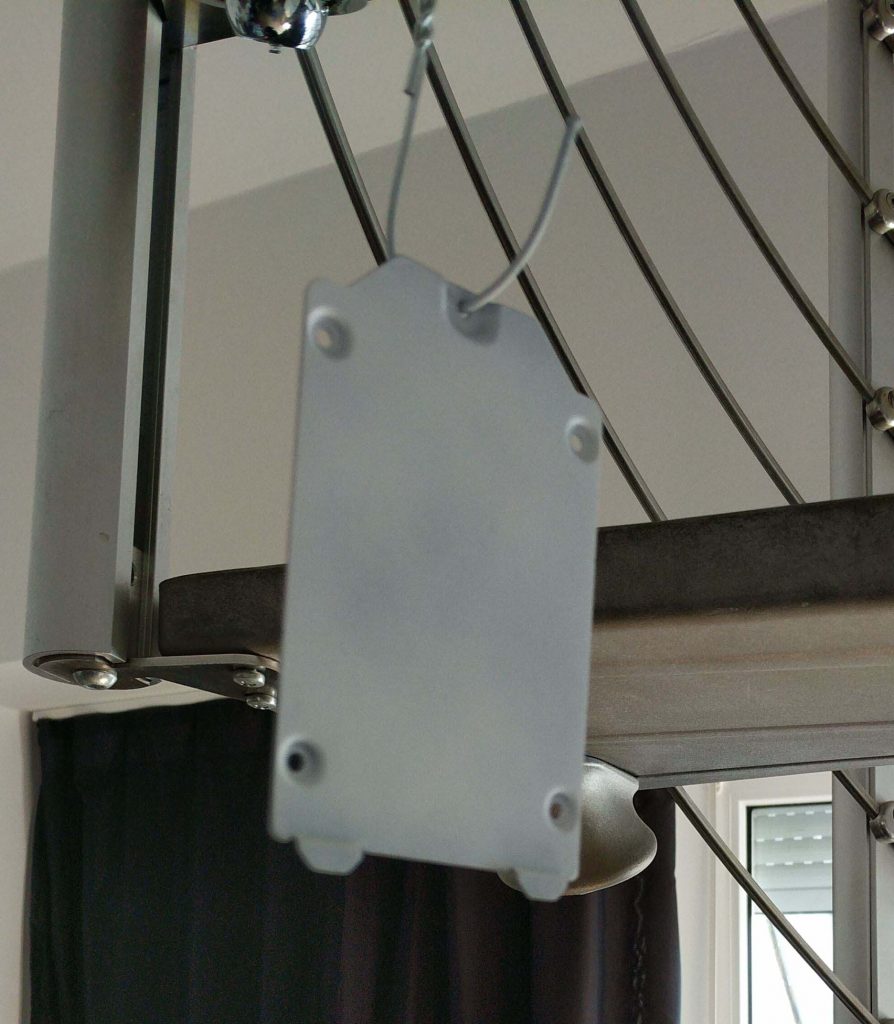 After two coats of primer, the part already looked really nice, after letting it dry I would add two coats of white paint and another two of clear finish. 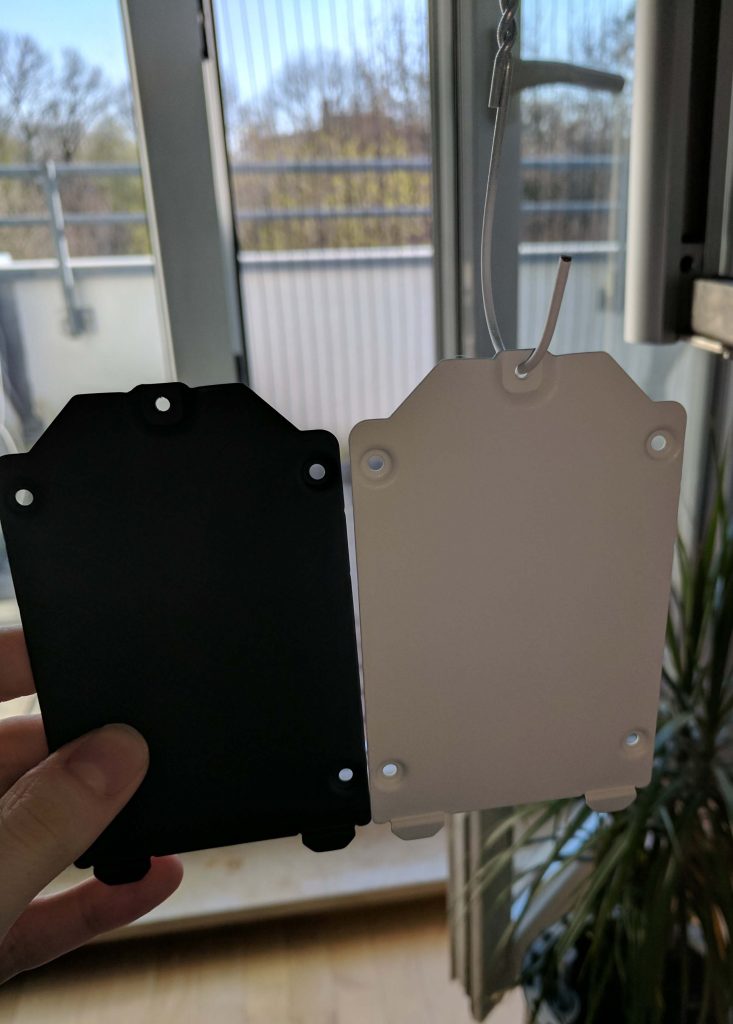 Compared to the original black, the white looked really awesome in my opinion. Since my apartment does not have that much space to hang every single part and let them dry a few days I went to my parents’ home and painted the rest of the case in their basement. I originally wanted to paint everything in their garden but the good old german weather didn’t allow that.

At first I totally misjudged the amount of paint I would need, thinking that two cans of each spray paint would be enough, but I ended up needing around four to six cans of each. Because of that I had to wait another week for more paint to arrive so that I could drive back to my parents’ and continue painting. The benefit of painting there was that I could hang every part on cloth hangers and let it dry long enough between the coats. 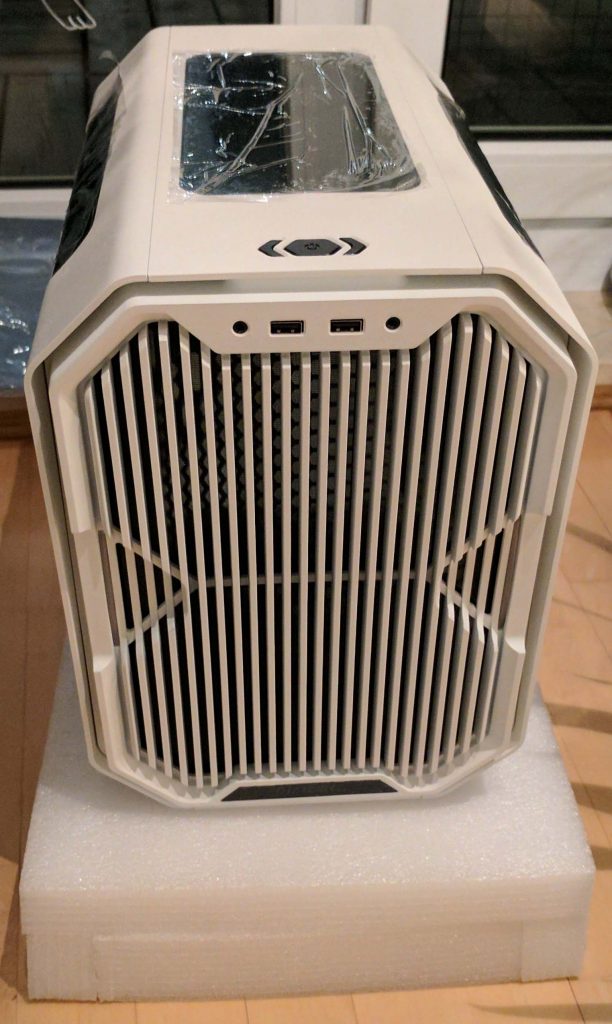 Once the parts were dry enough I put the case back together with new (white) rivets and screwed everything back together. In my opinion the painting turned out really nice.
The only problem I had was that the paint remained very tacky and neither a hairdryer nor talcum powder helped, which is why I applied another two coats of acrylic varnish. 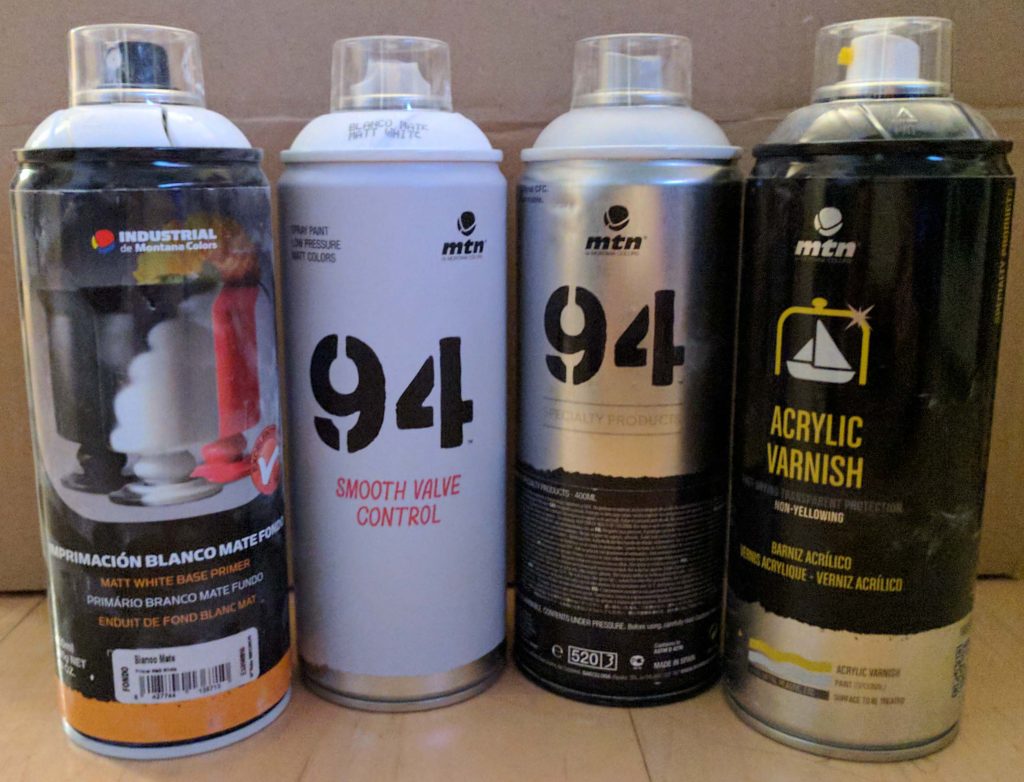 So to summarize, the case now had two coats of white primer, two of white paint, two of clear finish and two of acrylic varnish! 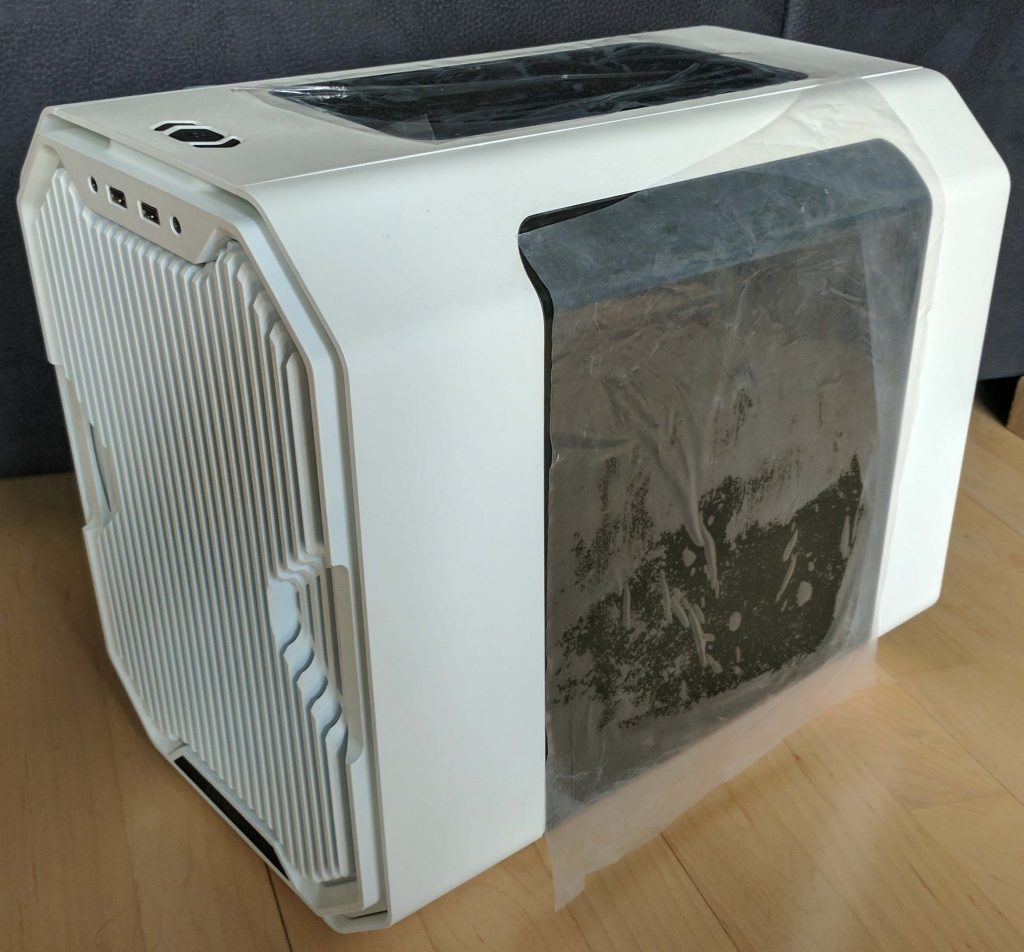 But after a few weeks of work, the paint-job was finally finished!

Because RGB is the new trend and I actually think that it looks nice I wanted to implement it into my build. Thankfully, with Asus Aura, this is quite simple. The only problem I faced was that the Antec Cube uses 5V RGB strips while Aura is made for 12V.
I decided to remove the two strips located at the bottom of the case and replace them with my own. I bought a simple 1m RGB 5050 strip from Amazon and cut it down to the right size. Since the connectors did not go through the small holes in the case I had to solder the cables directly to the strip. 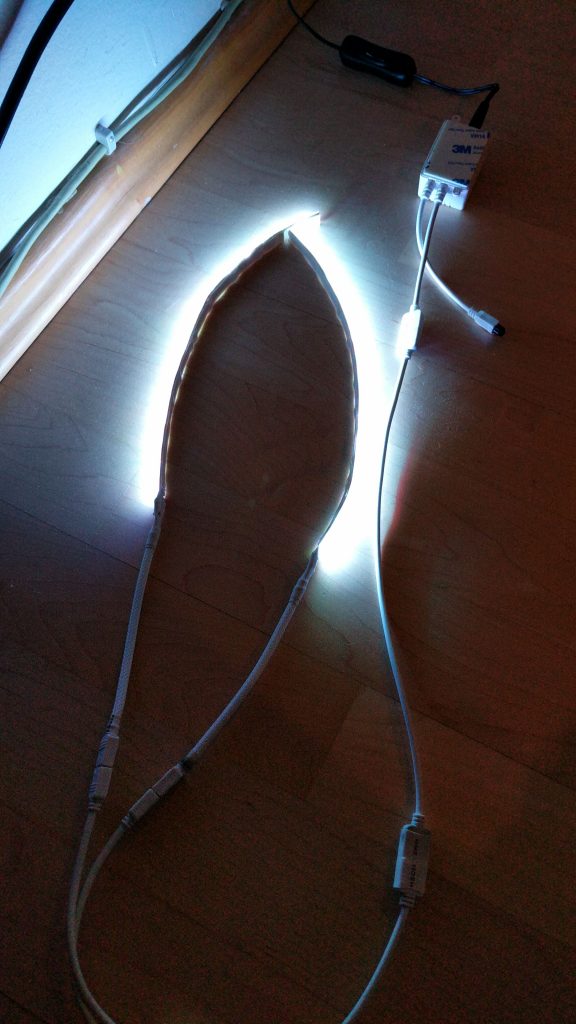 The cables were now small enough to fit through the holes and I even sleeved a small portion just for fun. A very nice aspect about the whole RGB lighting was that I could simply plug it into the wall outlet to test if everything work fine after soldering. At that time I only had planned my build but not ordered the parts yet. Therefore there was no possibility to test it directly with Aura. 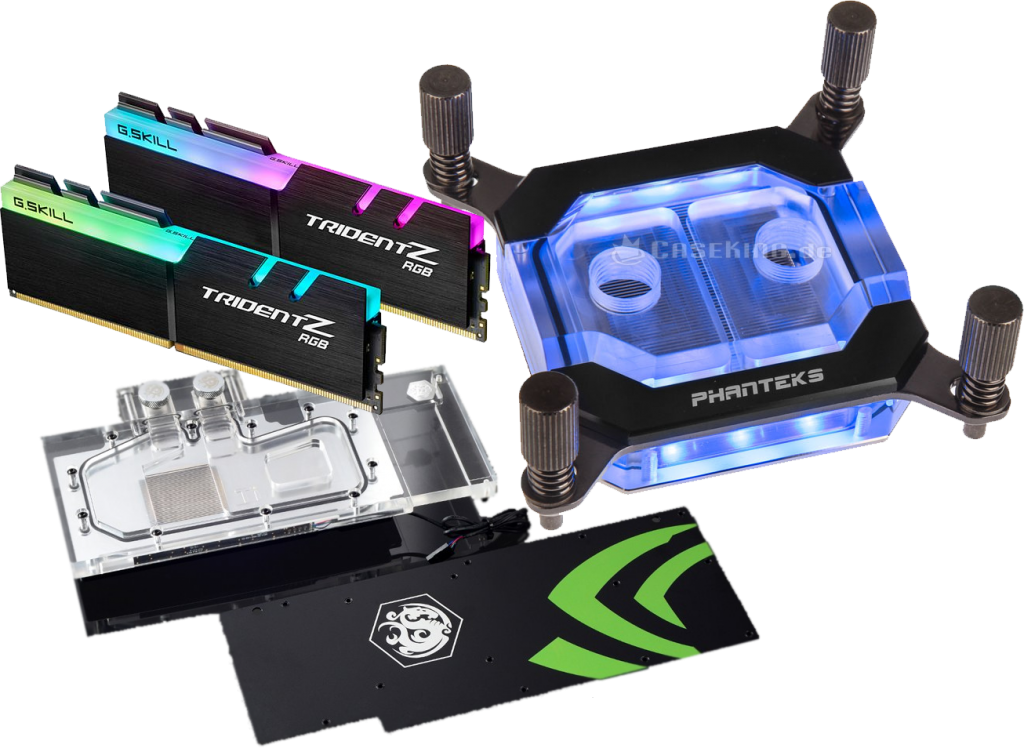 Phanteks’ cooler comes with an adapter to connect to Aura. Bitspower’s water-block also comes with a simple connector. Although I had to remove it as it did not fit in the standard connectors found on various RGB strips. After removing it I simply soldered the cables one by one to an RGB connector. This was very simple as the block’s cables were red, green, blue and black. The RAM from G.Skill simply required to install the latest Aura software and change a value in the BIOS in order to sync.

One aspect to make a PC stand out are sleeved cables. In my last build I learned how to sleeve cables. I found that it gave the build a really nice touch. In order to keep project SnowChild as white as possible I decided to sleeve every cable possible in white. 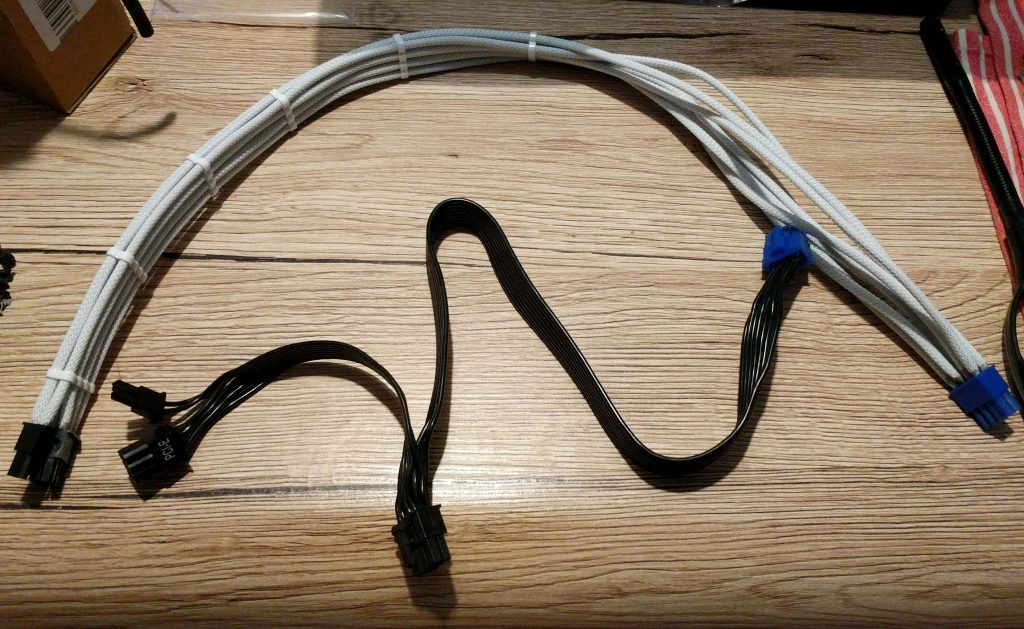 This was the result after I finished the first cables. I added some cable combs from E22 in order to keep the look really clean. The images shows the difference between non-sleeved and sleeved cables. While the black cables take less space and are definitely easier to work with, the white ones look way cleaner and feel more professional.

At the end I sleeved every single cable from my PSU, from the Antec Cube’s front panel and from the different parts like CPU/GPU block and water pump.
Since most motherboards come with 30cm+ SATA cables I ordered white ones from Amazon with a length of only 10cm. The Antec Cube allows for a really small distance between drives and motherboard-connectors.

After the paint and sleeving was done it was finally time to install the hardware.

I really fell in love with the Mini-ITX format, it is just so fascinating how tiny the parts are and how it takes up way less space compared to ATX or even µATX. In order to gain even more space to store the cables I decided to go with a SFX PSU. The Antec Cube is made for an ATX PSU. With the PP08 adapter from SilverStone it was no problem to fit an SFX PSU in it. This allowed me to store the unused cables easier at the bottom of the case. 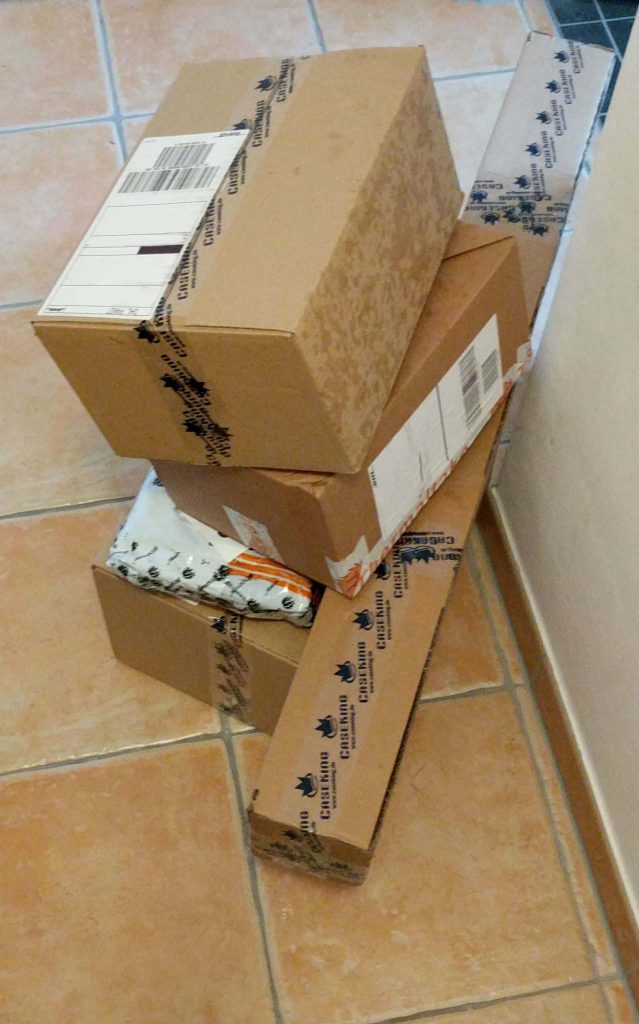 This was actually the whole packages I got simply for the watercooling parts, obviously the long one had the PETG tubes in it. 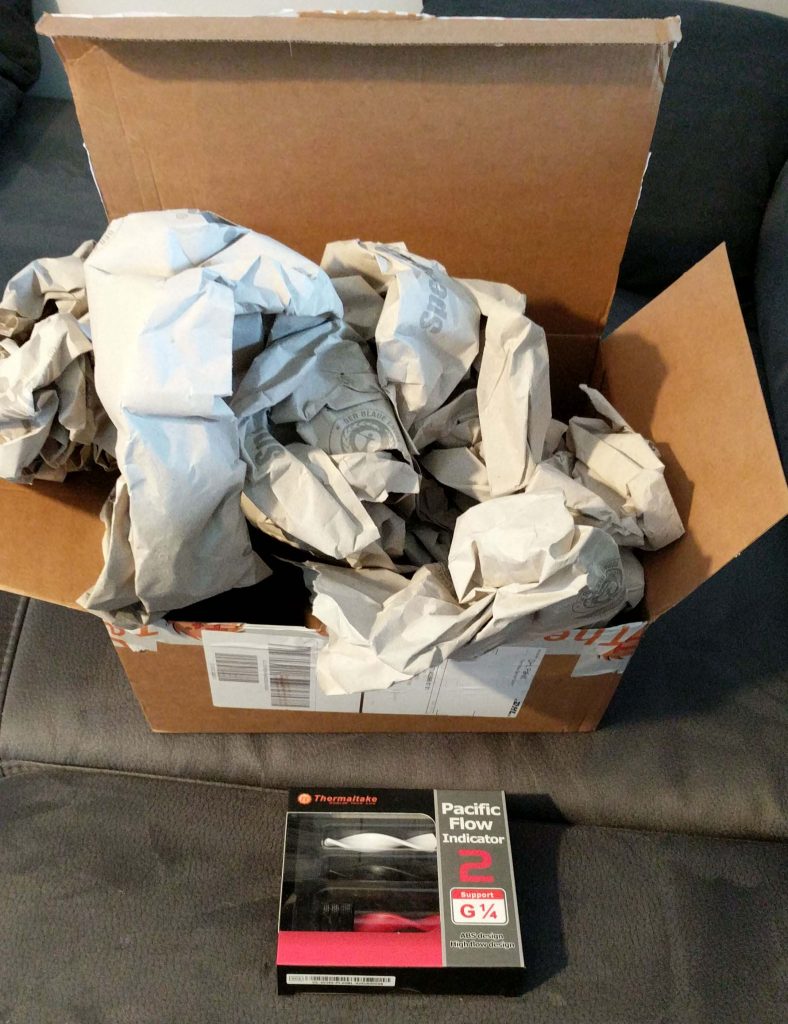 Apparently Thermaltake did not have smaller packages. I ordered the flow indicator as I thought it would be a nice addition to my build. On my latest loop the pump ran at a small speed. It was basically impossible to tell if it was running or not. With a flow indicator I could tell immediately if everything was working.

After planning the loop and installing the radiators, water-blocks and fittings in the case it was time to bend the hard tubes. Previously I had watched a few tutorials on YouTube in order to learn how to bend PETG tubes. Thanks to this I already knew the things to pay attention to.
First point to pay attention to is the heat of the tube. It has to be heated enough to become soft, but not too long or it will start to make bubbles.
The second thing to consider is not to bend the tubes too fast. Once heated the tubes stay flexible long enough so there is no need to rush. If the tubes are bent too fast it will create a fold. 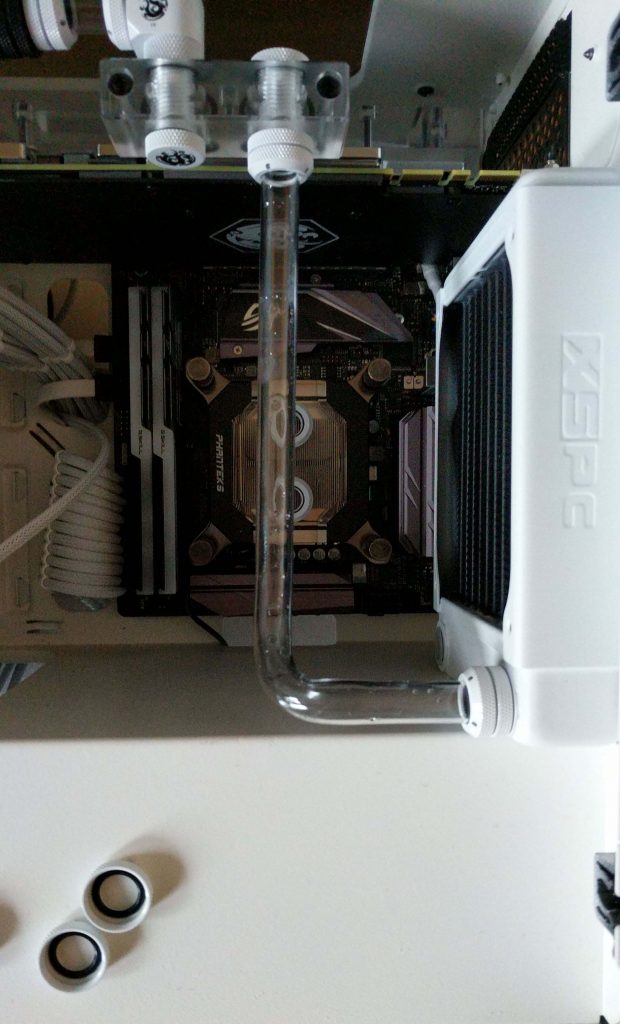 The first bend was a simple 90 degree one and turned out really nice. The next ones were a bit more difficult and I failed a few times. Thankfully I had ordered enough PETG tubes as I had anticipated that this process wouldn’t be easy. 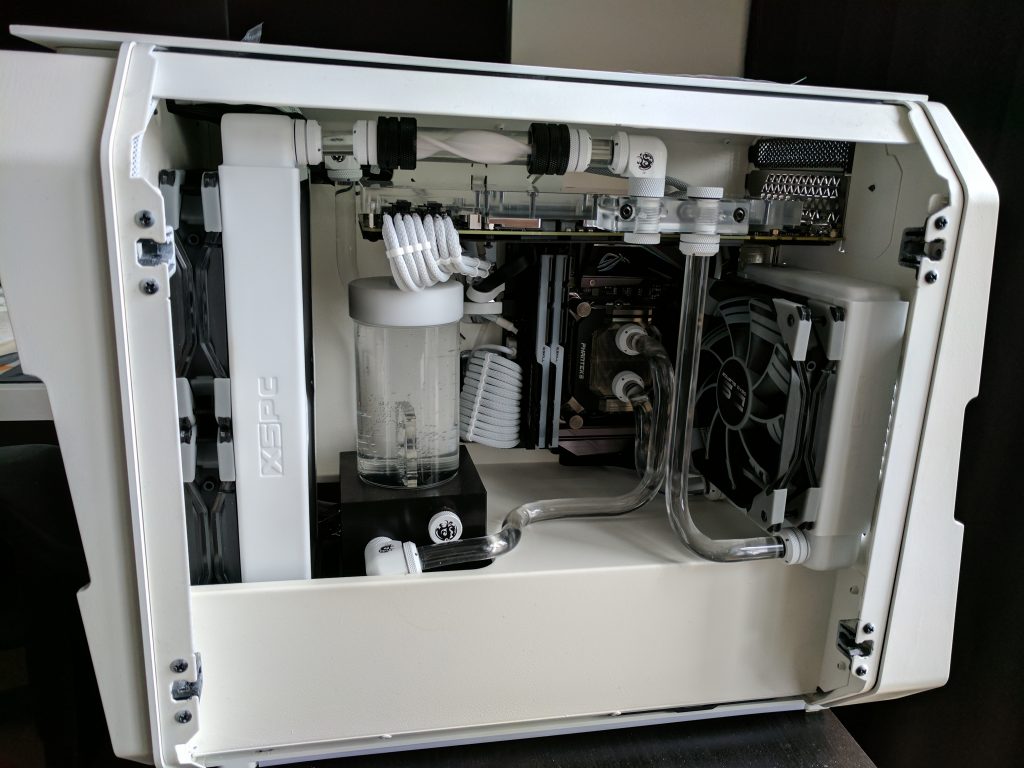 Once finished it was time for a leak test and thankfully everything was sitting tight. I use EKWB’s new CryoFuel coolant in clear for two reasons. The first one being that a clear or white coolant would probably be best in a RGB build. The second reason is that I have made a bad experience with colored coolant. The previous coolant I used was UV Green and left its color everywhere in the loop. Once drained the parts stayed green and became useless for other colors.

The hardest bends were the one on the tube going from the res/pump-combo to the CPU. I had to do a whole five bends on that single tube, four 90 degree bends and a 15 degree one just after the pump in order to fit the tube into the fitting. Thankfully the second try was the last one.

After having installed Windows 10 and all the drivers required I downloaded the latest Aura version from Asus’ website.
With some RGB splitter and adapter I could connect the two strips at the bottom of the case, three LEDs in the front and the CPU & GPU blocks. The RAM and motherboard were lit as well with Aura and gave a really nice result: 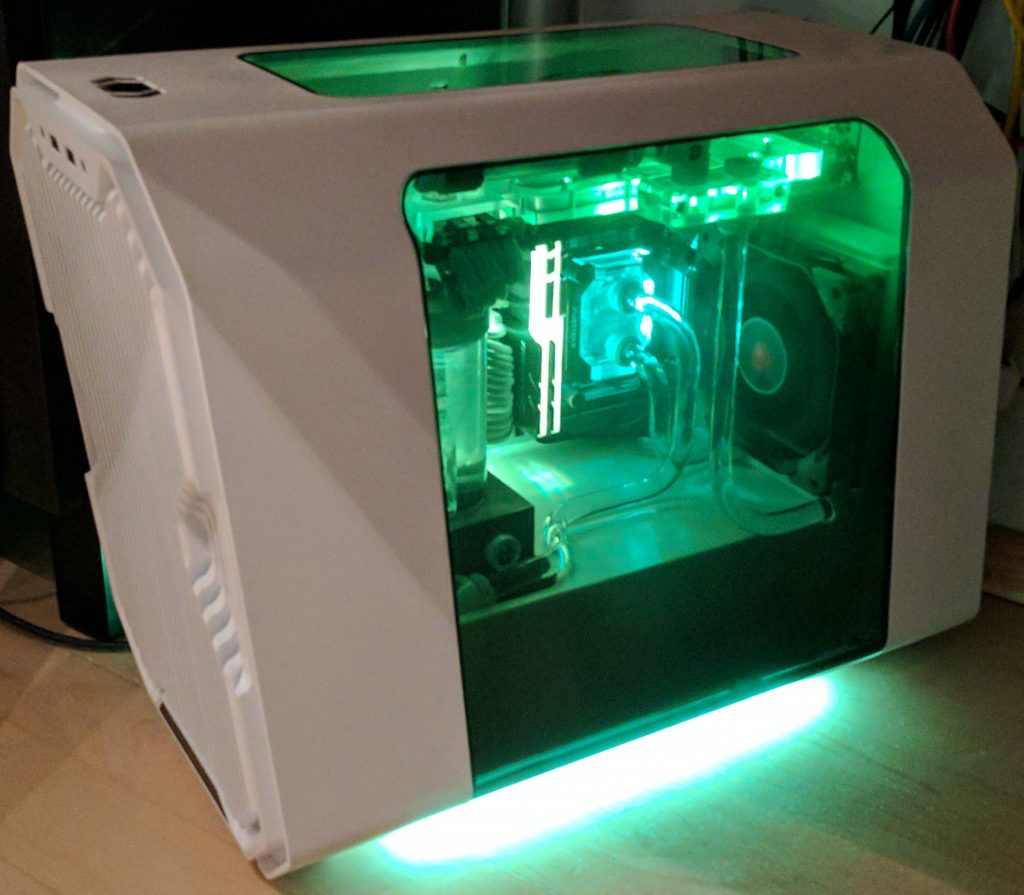 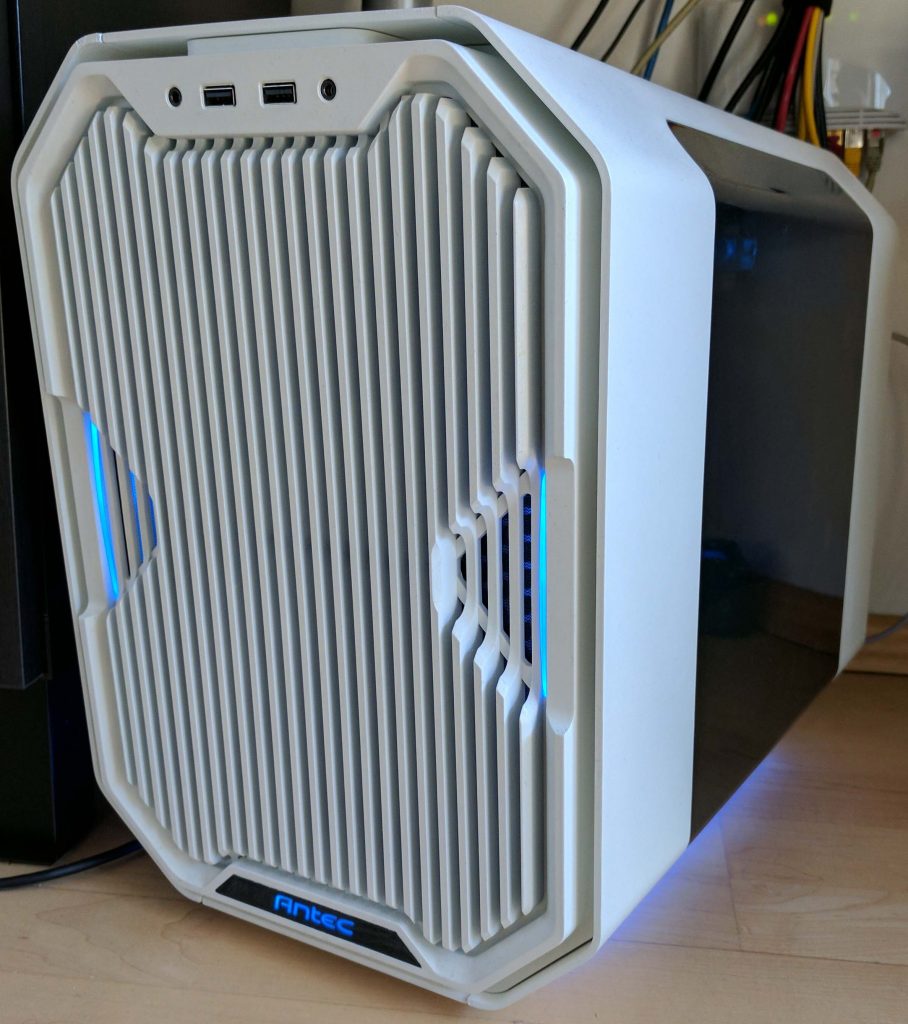 Project SnowChild turned out exactly as I imagined it and while it took more time and effort than I expected it was worth it.

The Antec Cube is a really awesome case with genius cable routing options. Sadly the LEDs connected to the front panel work on 5V. This is why I used my own 12V ones in order to sync it with Asus Aura.
There were two or three spots in the case where a single millimeter more or less would have prevented a component from fitting but thankfully everything found its place.

Finally, if I learned something with this build is that it is better to order twice as much paint and PETG tubes as you think you will need 😉